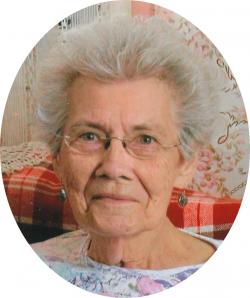 Doris Mae Jobb – 89, Truro, passed away peacefully on Wednesday, January 9, 2019, at Colchester East Hants Health Centre, Truro. Being the only child of Barry and Dorothy (Staples) Totten (Upper Belmont), she toddled around the logging camps where her parents worked during her pre-school years and later, as she grew older, helped out on the Totten Farm (Staples Brook Road), assisting Mom and Dad Totten with numerous farm chores.

For her education, she attended the one-room Upper Belmont School. Marrying Wendell in 1947 and having seven children in eleven years, there was rarely a day the clothesline was not filled with wash, summer and winter. When her children grew older, she worked as a clerk at various businesses – Davidson’s (Debert), Brown’s (Belmont), G.B. Murphy Jewellers, Diane Dress Shoppe and MacQuarries (all of Truro). After the death of her dearly-loved husband in 1970, she moved to Truro.

Doris’ family want to acknowledge Allison Gower for his love and dedication in caring for our mother the past number of years as her life journey became increasingly more difficult.

Arrangements have been entrusted to Mattatall – Varner Funeral Home, 55 Young Street, Truro, where the funeral service will be held 10 a.m., Saturday, January 26, 2019, Reverend Leslie Jobb officiating. Reception will follow. Interment in Crossroads Cemetery, 596 Belmont Road, Belmont. If so desired, donations in Doris’ memory to a charity of choice are welcomed. Private messages of condolence can be sent to the family by viewing Doris’ obituary on-line and selecting "Send A Condolence" at: www.mattatallvarnerfh.com