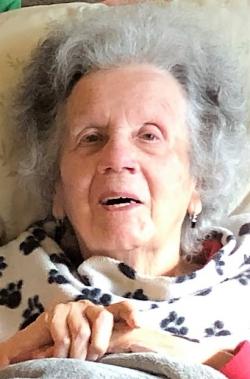 Armstrong, Blanche Eleanor, 93, Princeport, Col. Co., passed away peacefully on Friday, March 8, 2019 at home with her daughter by her side. Born in Murray Siding, she was a daughter of the late Aubrey and Stella (Whidden) Morrison. Mom and dad worked hard for many years. They formerly owned and operated Armstrong’s Meat Market and later Mary’s Grocery, both in Truro. Later she went to work for the Truro Daily News delivering bundles to the carriers from Truro to Shubenacadie and later worked for Frenchy’s where she became manager and retired at the age of 65. She enjoyed bowling, knitting, crossword puzzles, traveling. She was fondly known as the Button Lady at Frenchy’s. She loved travel on a monthly trip to the Casino on Ward Markie Bus Tours.

She had a great love for her family and looked after her mother for several years.

She is survived by her daughters, Rae of Burnaby, BC,  Judy (Terry) of Kelowna, BC, Joan (John) of England, Becca of Princeport; sons, Bill (Linda) of Malagash, Aubrey (Janet) of Brookfield, Gordon (Jamie) of White Rock, BC, John Douglas  of England; 3 grandchildren; several great-grandchildren; brother Roy of Truro; several nieces and nephews and several great nieces and great nephews.

She was predeceased by her husband of 41 years, William "Bill" Armstrong; sister, Hilda Wynn; brothers, Ron and Eugene.

Burial will take place on Sunday, August 11th at 1 pm in Watson Cemetery, 1997 East Prince Street, Truro, followed by a Celebration of Life from 2-4 pm in the Salmon River Fire Hall, 1102 Salmon River Road, Salmon River, Col. Co. Donations in memory may be made to the Children’s Wish Foundation of Nova Scotia or to the First Responders of the Cobequid District Fire Brigade. A special thank you to the First Responders of Cobequid District Fire Brigade, Doctors and Staff of the second floor, CEHHC, Truro, VON, the Palliative Care Team, Dr. Henderson and Lisa Weatherbee for your support and kindness given to our mother. Private messages of condolence may be sent to the family by viewing Blanche’s obituary on-line and selecting "Send A Condolence" at: www.mattatallvarnerfh.com