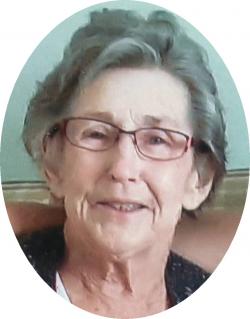 Shirley Rosalee (Rushton) Soley, Lower Economy, June 16, 1944 to September 6, 2019.On September 6th, 2019 after long and courageous battle with cancer Shirley Rosalee (Rushton) Soley, age 75, of Lower Economy, NS passed away peacefully at home surrounded by family. Born at home in Lower Debert, NS, she was the daughter of the late Burton (Burt) and Kathleen (Kate) (Selwah) Rushton. Shirley was a stay at home Mom until her children finished High School while at the same time providing childcare for other families, most of whom became like family to all of us and using her home to provide a collection service for property rentals for Mr. Reg MacDonald. Shirley then worked for the Arcade Lady Shop for a few years. In November of 1991 she started work at Lawtons Drugs head office until her retirement in September of 2005. She made many lifelong friends during her time at Lawton’s whom she treasured to the very end. Following her retirement, she and Paul moved from Eastern Passage after 30+ years there to their newly built home in Lower Economy. In her retirement Shirley was active in the Economy community especially with the Economy United Church.

Shirley is survived by the love of her life, husband Paul; her son Doug (Kathy); her daughter Donna, who selflessly devoted the last three months to help Paul fulfill his promise to Shirley to keep her at home in the house that she loved; her granddaughters Jessica Soley, Meagan Soley and Saoirse Soley (Eyvan). Brother Victor Rushton, Lower Debert, brother-in-law David Soley, Lower Economy, sister-in-law Rhoda Rushton, Lower Debert, and many nieces, nephews and great-nieces and nephews.

Arrangements are under the direction of the Mattatall~Varner Funeral Home, 55 Young Street, Truro. Visitation will take place on Wednesday evening from 7-9 pm and funeral service on Thursday, Sept. 12th at 2:00 pm, all in the Economy United Church, Economy. Reverend Florence Antle-Brison will officiate with burial to follow in the Economy Cemetery. A reception will follow at the Economy Community Hall. Donations in Shirley’s memory may be made to the Economy United Church or to the Economy Cemetery. Private messages of condolence may be sent to the family by viewing Shirley’s obituary on-line and selecting "Send A Condolence" at: www.mattatallvarnerfh.com