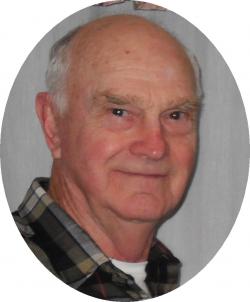 Douglas Bliss "Doug" Hamilton – 88, Truro, passed away Monday, June 1, 2020, with his daughters, Sharon and Sandra at his side, at Colchester East Hants Health Centre, Truro. Born in Truro, he was the son of the late William and Sadie (Works) Hamilton.

Doug began working at a young age in his father's business before becoming a brakeman with the CNR. He then decided to start his own painting contractor business which he ran for over 30 years. He was an owner/landlord of several apartment buildings and other real estate. Dad always had a strong work ethic and was never afraid to tackle any project. He also loved the outdoors and spending time at his woodlot in Kemptown, where they once lived. Dad was a kind and generous man and was always there to help anyone who needed a helping hand.

He loved to joke and was a great tease! He dearly loved his family and "Papa" had a special fondness for his grandkids and great grandchildren; it brought him great joy to see all his family "doing well". Doug and Eileen travelled frequently and spent many winters in Zephyrhills, Florida and summers at their Malagash cottage. In retirement Doug took up a smaller painting palette and began landscape painting, many of which hang proudly in his families homes.

The family would like to express their thanks to the caring nursing staff in Palliative Care (Colchester East Hants Health Centre) and all the staff of Victoria Way at Cedarstone Enhanced Care, Truro, for their compassionate care shown to our Dad. If so desired, donations in Doug’s memory to Heart and Stroke Foundation, Diabetes Canada or a charity of your choice are welcomed.

Arrangements have been entrusted to Mattatall – Varner Funeral Home, 55 Young Street, Truro. Private messages of condolence may be sent to the family by viewing Doug’s obituary on-line and selecting "Send A Condolence" at: www.mattatallvarnerfh.com