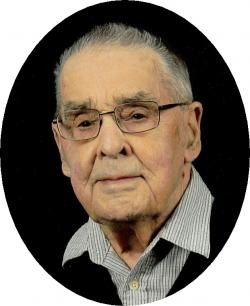 Harold Cecil McNutt – 94, Truro, formerly of Canso, passed away peacefully, with his daughter, Karen and his special friend, Doris at his side, on Saturday afternoon, September 12, 2020, at Cedarstone Enhanced Care, Truro. Born in Truro, he was a son of the late Stanley and Hattie (Totten) McNutt.

Harold was a member of Brunswick Street United Church, Truro. Harold served in the Canadian Merchant Navy during the Second World War, joining at 17 years of age. He served on oil tankers, loading in Venezuela, joining the Atlantic convoys out of Halifax and returning to Murmansk, Russia and other Baltic Sea locations. He was also on supply ships crossing the Atlantic ocean to the United Kingdom during the war.  A dedicated member of Royal Canadian Legion, Branch 26, Truro, he sold poppies every year. In his earlier years, Harold worked with Canada Wire and Cable in Toronto. Upon moving to Canso, he was a distributor of propane gas and then owned and operated the canteen at Canso Seafoods.

An active community member, Harold served with the Lions Club in Canso and was a member of The Good Neighbours Club in Truro. He enjoyed volunteering in any way that he could and was a firm believer in being part of the community that you lived in and that every small thing you did would count. Harold often told his friends that if every person picked up just a little bit of litter, our community would be so much more beautiful. Harold found a true friend when he met Doris Grant and the two of them spent many happy times together and were regular fixtures at the local dances as many nights as they could attend!

Due to Covid-19 restrictions, a private funeral service will be held on Wednesday, September 16, 2020. Webcasting of the funeral service will be open to all and may be viewed from this site at 10:55 a.m., Wednesday, September 16, 2020; this link will remain active for some time after the funeral. To access the webcast, click on "Video of Funeral" link to the left of this obituary. If so desired, donations in Harold’s memory to Royal Canadian Legion, Branch 26, Truro (Poppy Fund) or Brunswick Street United Church are welcomed. Private messages of condolence may be sent to the family by viewing Harold’s obituary on-line and selecting "Send A Condolence" at: www.mattatallvarnerfh.com