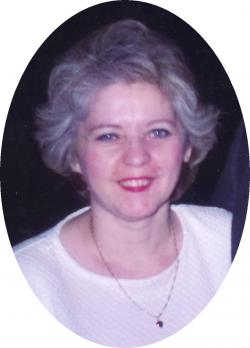 Pamela (Peggy) Marguerite (Barter) DeCoste. It is with great sadness and broken hearts that the family announces the sudden passing of Peggy DeCoste, 70, of Debert, N.S., at Colchester East Hants Hospital in Truro on November 17, 2019. Born on April 16, 1949 in St. Stephen, N.B., to the late Clayton and Marguerite (Kelly) Barter of Milltown, N.B. She graduated from St. Stephen High School and New Brunswick Business College, and came to Truro in 1971 to live with her sister, Dorothy. Peggy found work at Polymer Int., and it was there she also found her future husband, Dan. After a few years at Polymer, Peggy started a career at the Correctional Service of Canada, where she worked for 30 years before she retired.  After Dan retired in 2014 they purchased a 5th wheel trailer and put it on a lot in Grand Narrows, Cape Breton, overlooking the "Beautiful Bras D’or" and the village of Iona. It was there that Peg and Dan enjoyed some of their best times and memories of their wedded life. Peg was a family person and hers meant everything to her. She liked nothing more than early (any time after 5am) mornings, sitting on her back porch swing, drinking coffee and admiring all her beautiful flowers and plants. Peg was a true and loyal friend who will be greatly missed by many. So long, my Milltown girl.

Peggy is survived by her husband Dan and son James, both of Debert, sister Theresa Seamans (late Ashley) of Fredericton, N.B., brothers Tom (Connie) of Kouchibouguac, N.B, Jim (Debbie) of Fredericton, N.B., and Bob (Marion) of Ft. Myers, Florida. Also, sisters in law Betty (Barry) Merlin of Hilden and Doris Anderson of Lower Truro, numerous nieces and nephews, and her constant companion, her little dog Maggie, who is sure missing her Mommy.

Besides her parents, Peg was predeceased by her sister Dorothy Zinck and brother Timothy (in infancy), mother and father in law, Cil and Art DeCoste, and brother in law, Ashley Seamans.

In keeping with Peg’s wishes, cremation has taken place. There will be no visitation. Funeral services will be held at the Immaculate Conception Church, 669 Prince St, Truro on Monday, November 25, at 11am, with Father Dariusz Miskowicz officiating. Reception to follow at Campbell Hall. Arrangements entrusted to Mattatall-Varner Funeral Home, 55 Young Street, Truro. Internment at a later date in Middle Road Cemetery in Debert. If so wished, donations may be made to Shriners Hospital or any children’s health foundation. Private messages of condolence may be sent to the family by viewing Peg’s obituary on-line and selecting "Send A Condolence" at: www.mattatallvarnerfh.com