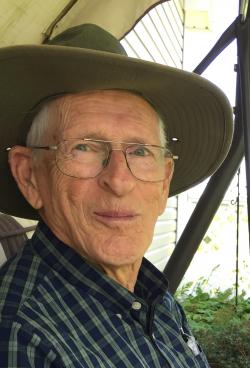 Neil Edward Taylor – 86, Belmont, passed away on Saturday, February 6, 2021, with his family by his side, following a brief illness. Born in Economy, he was a son of the late Archie and Jean (Morrison) Taylor.

Neil wore many hats in his lifetime and was a wealth of knowledge that will be missed. His patience and ability to teach young people how to create things occupied the majority of his career as an Industrial Arts teacher at Brookfield Junior High. Whether it was a silk screen t-shirt, a wooden piggy-bank or something from the metal shop, he made sure students learned the necessary skills with patience and perseverance. Neil’s instruction continued at home with Greg and Lisa, helping them build everything from balsa wood or remote control airplanes to cedar strip canoes or even rebuilding cars. Neil had many other hobbies that included twirling Aldene around on the square-dance floor, silk-screening posters or making bubble-gum measuring devices for the church picnic, bicycling "around the loop", tying flies and fishing trips with Harold or hunting trips with his brother-in-law, Burrell. Neil was an avid photographer, and a tough opponent around the kitchen table in Belmont, whether he was playing dominoes or Crib.

He was a member of Lower Onslow United Church where he served on various committees as well as helping out with Sunday school picnics, the apple pie fundraisers and the establishment and maintenance of the Lower Onslow Clarke Cemetery.

When Neil was finished building bigger projects he kept his hands busy with carving wooden birds, fishing men in canoes, skiing grandchildren and Christmas decorations. His family and friends were fortunate to receive many of these wonderful creations over the years.

Neil lived in an amazing community and will be greatly missed by lifelong neighbours and friends, Paul and Nancy Sulis, Harold and Sheila Stewart and Sheila Sabine.

Arrangements have been entrusted to Mattatall - Varner Funeral Home, 55 Young Street, Truro, where the funeral service will be held 10 a.m., Friday, September 17, 2021, Reverend Glenn MacLean officiating. (Face coverings must be worn while inside the funeral home; webcasting of the funeral service will begin at 9:55 a.m., Friday, September 17, 2021, and will remain on this site for some time.) Private interment in Lower Onslow Clarke Cemetery, Lower Onslow. If so desired, donations in Neil's memory to Trinity United Church or Dartmouth General Hospital Foundation are welcomed. Private messages of condolence may be sent to the family by viewing Neil’s obituary on-line and selecting "Send A Condolence" at: www.mattatallvarnerfh.com