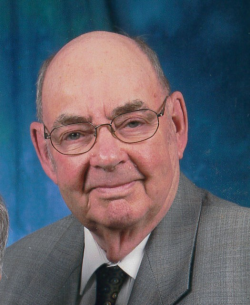 Reverend Russell Leon Harding – 93, Bible Hill, passed away peacefully, with his loving family at his side, on Thursday afternoon, July 15, 2021, at Colchester East Hants Health Centre, Truro. Born in Little Harbour, Shelburne County, he was a son of the late Harold and Honora (Thorburn) Harding.

Russell attended school in Little Harbour and in the mid-40s, he started fishing commercially; he and his brother, Harry, fished together for 16 years. In 1956, he and Paula were married and started their family, being blessed with two children, Arthur and Cynthia. He was a member of Little Harbour United Church where he served as an Elder and Sunday school teacher.

In 1966, Russell came ashore and he and his family moved to Halifax so he could attend Pine Hill Divinity College, obtaining his Bachelor of Theology and becoming an ordained minister in 1970 with The United Church of Canada. He served pastoral charges in Northumberland (NS), Scotsburn (NS), Chipman (NB), Crossfield (AB), North Bedeque (PEI) and Sheet Harbour (NS).

He retired in 1993 and moved to Bible Hill and continued to serve pastoral charge appointments in Maitland, Upper Londonderry and Rawdon. In response to the shut-down of the cod fishery, he was also involved in the establishment of Coastal Communities Network and served as First Vice President for ten years representing Maritime Conference. Russell also served his ministry in various other ways, offering his knowledge and support to many worthwhile initiatives and committees.

Arrangements have been entrusted to Mattatall – Varner Funeral Home, 55 Young Street, Truro, where Russell’s family will receive friends from 6-8 p.m., Tuesday, July 20, 2021. (Please use the front double doors of the funeral home, wear a mask, register and practice physical distancing.)

Funeral service will be held 2 p.m., Wednesday, July 21, 2021, at St. David’s United Church, corner of Pictou Road and St. David’s Avenue, Bible Hill, April Hart officiating. (Due to Covid-19 restrictions, seating is limited and you must pre-register to attend the funeral service by calling 902-893-3177; thank you for your cooperation and understanding. Webcasting of the funeral service will begin at 1:55 p.m., Wednesday, July 21, 2021 and will remain on this site for some time.) Interment at a later date in Woodlawn Cemetery, Little Harbour, Shelburne County.

Family flowers only, please. If so desired, donations in Russell’s memory to St. David’s United Church or Canadian Cancer Society are welcomed.

Private messages of condolence may be sent to the family by viewing Russell’s obituary on-line and selecting "Send A Condolence" at: www.mattatallvarnerfh.com