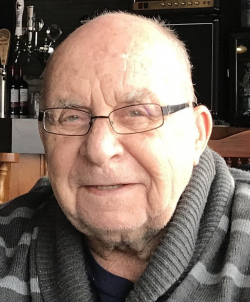 He was predeceased by his wife, Phyllis (Crowe); sisters, Letha, Fran, Doris; brother, Clifford. Arden was born in Truro to the late  Clifford and Frances (Greene) Wheadon, one of five children.

At the age of 18, in February 1944, he enlisted in the Canadian Army. After basic training and further training as a gunner, he served in England and Holland before returning to Canada and finishing his service at York Redoubt. Arden married Phyllis Crowe, his loving wife of 65 years, on February 14, 1947.  Shortly after, in 1948, they moved just outside Truro to Hilden, where they built a house and made their life and where Arden continued to live until 2016.

After his discharge from the Army, Arden worked odd jobs until he found permanent employment with Canadian National Express. He worked at CN until his retirement in 1981. In Hilden, Arden and Phyllis raised two children, Mike and Arlene. Mike and Arlene built their own lives, Mike marrying Marlene McNutt and settling in Hilden and Arlene marrying Don Fox in Calgary and settling in Toronto. Mike and Marlene’s children, Wade (Misti Rutherford) and Julie (Bobby Wood) each blessed Arden with great grandchildren, Brooklyn, Sage and Tavish (Wade and Misti) and Makayla and Kaitlyn (Julie and Bobby), and continue to live in the Truro area. Arlene and Don’s children, Joel (Lesleanne Blakely) and Tess (Jason Minster) live in Toronto.

While living in Hilden, Arden and Phyllis enjoyed camping and fishing and, later on, playing cards with friends. Arden was an avid sports fan and watched all his favourite teams on TV as much as he could (and Phyllis would allow).

As a veteran, Arden became a proud and long-time Life Member of the Royal Canadian Legion, Branch 26, Truro. Arden was a kind and generous man with a quick wit and a strong dedication to his community.  He will be dearly missed by his family, friends and acquaintances.

The family would like to acknowledge all of the excellent care, kindness and company that the staff of Camp Hill Veterans Hospital provided to Arden during his stay there.

Arrangements have been entrusted to Mattatall – Varner Funeral Home, 55 Young Street, Truro. Private messages of condolence may be sent to the family by viewing Arden’s obituary on-line and selecting "Send A Condolence" at: www.mattatallvarnerfh.com