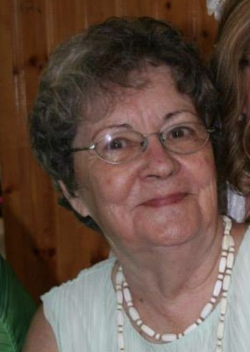 Delma Morrisey - 85, Truro, passed away peacefully at home, surrounded by family, on Monday, September 20, 2021. Born in Truro, she was the daughter of the late Edison and Frances (Cameron) Patton. She was predeceased by her loving husband of 59 years, Bob, and her only sibling, Sonny Patton.

She was a devoted wife, mother of six, grandmother to twelve and great grandmother to ten. She cherished time spent with loved ones. She loved to dance, laugh, read, do crosswords and watch her favourite soap operas. She was an exceptional baker and was especially known for her homemade bread and she always made sure that her cookie jar was filled for her beloved grandkids. One of her favorite places was the "Old House" in Minasville.

She had an extensive work career starting with the Royal Bank in Halifax. She took an assistant lab technician course at Camp Hill Hospital and worked off and on at the Truro hospital until 1963. She started her insurance career at Central Agency and Norwich Union, then went to Fundy Agencies with Dan Duguay and then to Macdonald Chisholm where she was an insurance broker until her retirement in 1997.

The family would like to thank the VON, Palliative Care staff including Dr. Cortney Smith and nurse Angela McDonnell, and Drs. Rowe, Locke and Fahim for their kindness, compassion and commitment to Delma’s wellbeing and exceptional care. Also, a special thanks to Willard Richardson for going above and beyond as a neighbor.

Arrangements have been entrusted to Mattatall – Varner Funeral Home, 55 Young Street, Truro. Private messages of condolence may be sent to the family by viewing Delma’s obituary on-line and selecting "Send A Condolence" at: www.mattatallvarnerfh.com