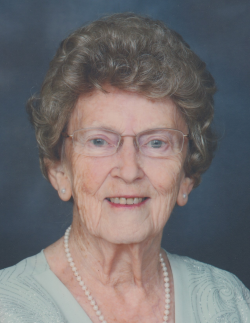 Frances Eileen Purdy – 93, Bible Hill, passed away at home on Sunday, October 31, 2021, with family comforting her, in her final days. She was truly a great mother and loving wife, and her passing will leave a terrible void in the lives of those who knew and loved her.

Frances was born and grew up in Bear River, Nova Scotia. She came to Truro to study secretarial skills and took a position at Nova Scotia Agricultural College, where she met and fell in love with Crawford; they were married August 1, 1951. She was a longstanding member of what was known as First Baptist Church, Truro, where she had been very active in the ladies groups. Frances was a member of Bible Hill Fire Ladies Auxiliary, a founding member of Colchester Heritage Rug Hookers as well as a member of Marigold Guild of Needle Arts.Frances loved handy work and her fingers were always busy; knitting, sewing, crafting, quilting, rug hooking and cross stitch.

In addition to being a stay at home wife and mother, for a number of years she ran a home-based business, Artex - liquid embroidery. Being a top sales leader for them, she rose in the ranks to become a district leader and traveled across the country to attend conventions.

Frances grew up on a farm and always had and loved kittens. She also loved hummingbirds, butterflies and flowers, her favorite being sweet peas. Frances was a 38-year cancer survivor. She was awarded "Volunteer of the Year" in 2010, by the Village of Bible Hill, and a tree was planted in her honour. She was selected to be a medal bearer in the Rick Hanson’s, Man in Motion 25th Anniversary tour in 2011, as it passed through Bible Hill.

Private interment will be held in Crossroads Cemetery, Valley. Arrangements have been entrusted to Mattatall - Varner Funeral Home, 55 Young Street, Truro. Memorial gifts, if desired, may be made to a charity of choice.  Private messages of condolence may be sent to the family by viewing Frances’ obituary on-line and selecting "Send A Condolence" at: www.mattatallvarnerfh.com