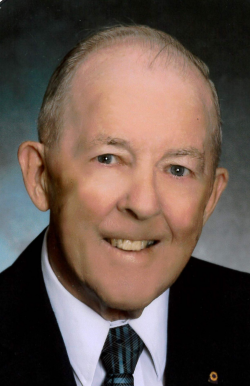 Beal, Allan Waldo – 88, Truro passed away on his 88th  birthday, on Sunday, November 7, 2021 at the Aberdeen Hospital, New Glasgow. Born in Midgic, New Brunswick, he was a son of the late William and Margaret (Wheaton) Beal.

Allan was active in his community and travelled extensively throughout many parts of the world. In his younger days, he was active in sports such as baseball, hockey, curling and golf. He scored an eight ender in curling and had a hole-in-one in golf. Allan was particularly active in Lions, having held several offices. He was a lifetime member and served as District Governor in Lions (1990-1991) for Nova Scotia and received numerous international awards.  He spent forty years with Scotia Bank at branches in Nova Scotia and New Brunswick.

Arrangements have been entrusted to Mattatall-Varner Funeral Home, 55 Young Street, Truro. Due to COVID, a funeral service will be held at a later date in Spring 2022. If so desired, donations may be made to Heart and Stroke Foundation or Kidney Foundation. Private messages of condolence may be sent to the family by viewing Allan’s obituary on-line and selecting "Send A Condolence" at: www.mattatallvarnerfh.com