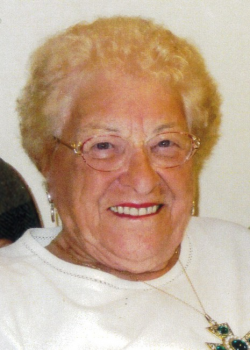 Florence Margaret Hamilton – 105, Truro, passed away on Friday morning, November 12, 2021, at Wynn Park Villa, Truro. Born in Devil’s Island, Halifax County, she was a daughter of the late Frank and Mary (Morash) Faulkner. When she was two months old, the family moved to Eastern Passage.

In 1940, she met her future husband, Sgt. Harold Hamilton, when he was stationed at Devil’s Battery Eastern Passage; he was sent to war in 1942 and returned in 1945 when the war was over. They were married in 1946 at St. John’s Anglican Church and made their home in Truro; they were married for 57 years before her husband passed away in 2003.

She worked at Layton’s Snack Bar, R.H. Jones China and Hardware Store and The Palliser Restaurant for 28 years. She loved old time music, dancing, and knitting mittens and socks to give away. She belonged to The Good Neighbours Club, Veterans Widow and Widowers Association, Legion Lyrics and St. John’s Anglican Church. In 1949, she joined the Royal Canadian Legion, Branch 26, Ladies Auxiliary, and worked continuously for 69 years.

Many people will remember her working in the canteen on Bingo nights, as well as banquets, weddings, dances, concerts or seeing her carrying the colours for the Legion and Auxiliary on parade for 36 years. She was Chaplain for more than 20 years, was made a Life Member in 1975 and was President in 1970-1971. For her dedication, she was presented with many awards; the most important one was the Meritorious Service Award and The Palm Leaf, the highest award she was very honoured to receive. She also received the Queen Elizabeth II Diamond Jubilee Medal and CTV Maritimer of the Week Award.

(Please use the link door between the church and hall. Also, please note that proof of double vaccination and photo identification must be presented prior to entry to the funeral home and church for the tribute service, visitation and funeral service and masks must be worn at all times.)

Interment in Robie Street Cemetery, 125 Robie Street, Truro. If so desired, donations in Florence’s memory to St. John’s Anglican Church are welcomed. Private messages of condolences may be sent to the family by viewing Florence’s obituary on-line and selecting "Send A Condolence" at: www.mattatallvarnerfh.com