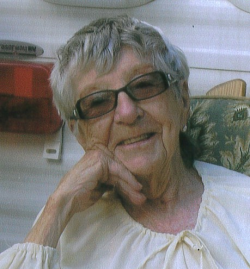 Peggy was a secretary in Woolwich Arsenal, London, England in the war years and then as a teacher at Success Business College in Truro for eight years. In the early years, Peggy operated a convenience store with her husband, Scott, for over 20 years; she joked that she finally got her name in lights, "Peg’s Lunch"! Her sense of humour will be remembered by all who knew her, and her love of dancing stayed with her until the end.

In 1985 she moved to British Columbia and bought and sold several properties in order to start on many travelling journeys, living in Mexico on and off for several years; she led an adventurous life! Peggy returned to live in Bible Hill in the summer of 2011 after the sudden death of her daughter, Christine, whose cremated remains were buried in the family plot in Bible Hill Cemetery on September 17, 2011. Peggy returned to British Columbia on June 10, 2013, where she spent her remaining years.

Graveside interment service will be held 1 p.m., Friday, November 26, 2021, at Bible Hill Cemetery, 41 Warren Drive, Bible Hill. (Please note that proof of double vaccination and photo identification will be requested prior to entry to the cemetery, and masks must be worn at all times; thank you for your co-operation and understanding.) If so desired,  donations in Peggy’s memory to a charity of choice are welcomed.

Arrangements have been entrusted to Mattatall – Varner Funeral Home, 55 Young Street, Truro. Private messages of condolence may be sent to the family by viewing Peggy’s obituary on-line and selecting "Send A Condolence" at: www.mattatallvarnerfh.com