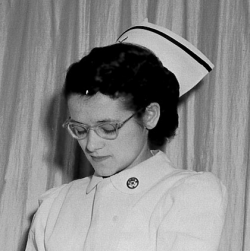 Therese Marie Dickie – 93, Truro, passed away unexpectedly on Monday evening, December 27, 2021, at Wynn Park Villa, Truro. Born in Truro, she was a daughter of the late Joseph and Florence (Doucette) MacKenzie. She grew up in Truro with her six brothers and three sisters on Park Road near Victoria Park and Miller Street by the rail yards.

Therese was a member of Immaculate Conception Roman Catholic Church. She graduated from St. Martha’s Hospital Nursing School, Antigonish in 1950. Her career as a Registered Nurse began at the old Colchester Hospital in the 1950s and 1960s. She completed her re-entry course in 1979 and then continued working at Colchester Regional Hospital from 1979 – 1993 from where she retired.

Our mother was a gentle soul who showed nothing but kindness to everyone. Family meant everything to her and she loved all her family members and friends, near and far. Therese is survived by her sons, Angus, Moncton; Dave, Steven, Truro; grandchildren, Amanda, Zane, Rodrigo, Diego; siblings, Hugh MacKenzie, Winnipeg, Manitoba; Catherine Daniels, Destin, Florida; Ronald (Louella) MacKenzie, Truro; Lauchie MacKenzie, Halifax; many nieces and nephews.

Special thanks are extended to friends and neighbours, especially, Bill and Phyllis Mills. As well, we extend our sincere appreciation to the staff of Wynn Park Villa, especially Sharon and Denise.

If so desired, donations in Therese’s memory to The Arthritis Society or Heart and Stroke Foundation are welcomed. Private messages of condolence may be sent to the family by viewing Therese’s obituary on-line and selecting "Send A Condolence" at: www.mattatallvarnerfh.com