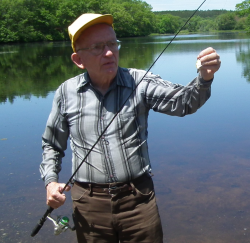 Ray served in the US Army; after which, he attended MIT and studied to become a Civil Engineer. He worked at Bowater Mersey in Liverpool, Nova Scotia, for many years before retirement. He was supportive of Economy United Church and proud of the fact that his mother was involved in UCW. He absolutely loved fly fishing and tied hundreds of fishing flies over the years, passing on his knowledge to many others so that they could craft their own unique flies. Ray also enjoyed hunting, ammunition loading, target shooting, travelling, practicing his Engineering Skills in many innovative ways, listening to his large collection of music, and he loved watching movies and sports on TV.

Ray was predeceased by his brother, Arthur (Joan) Roberts. He is survived by his nephew, Douglas (Elizabeth "Betsy") Roberts, and their sons, Andrew and family, Benjamin and family, and Lucas; niece, Karen (Emil) Eastburn, and their sons, Lee, and James (Greta). He was especially close with cousins, Shirley (Roberts) Kennie, Coryl (Roberts) Spencer, Kathryn (Roberts) Richards, and friends Burchell and Lucia Fulmore and leaves behind a large circle of family and friends.

Special thanks to VON homecare staff for their wonderful care and staff at Colchester East Hants Health Centre and The Red Cross for their friendly service. Due to Covid-19 restrictions, a funeral service will be held at Economy United Church at a later date when all family and friends can gather together. Interment will be held in Economy Cemetery. If so desired, donations in Ray’s memory to Economy United Church are welcomed.

Arrangements have been entrusted to Mattatall – Varner Funeral Home, 55 Young Street, Truro. Private messages of condolence may be sent to the family by viewing Ray’s obituary online and selecting "Send A Condolence" at: www.mattatallvarnerfh.com