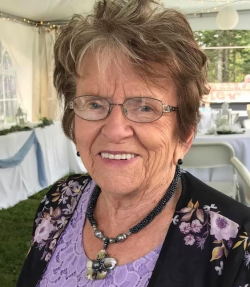 Shirley worked for 46 years at Stanfield’s and volunteered for many years with the Ladies Auxiliary at Royal Canadian Legion, Branch 26, Truro; she and her husband also volunteered together at the Legion in other roles as well. Shirley’s kitchen was always a hub of activity, baking goodies too numerous to mention and was famous for her biscuits which she shared the recipe with several people. She loved to dance and attended the dances at the Legion and other places, enjoyed bowling up until just a few years ago and playing cards, especially 45s.

She was a beautiful person, inside and out, who had a beautiful soul and feisty attitude! She absolutely loved being on the go, visiting with family and friends and she will be deeply missed.

Arrangements have been entrusted to Mattatall – Varner Funeral Home, 55 Young Street, Truro, where Shirley’s family will receive friends from 4-6 p.m., Thursday, April 21, 2022. Private interment in Bible Hill Cemetery. If so desired, donations in Shirley’s memory to charity of choice are welcomed. Private messages of condolence may be sent to the family by viewing Shirley’s obituary on-line and selecting "Send A Condolence" at: www.mattatallvarnerfh.com