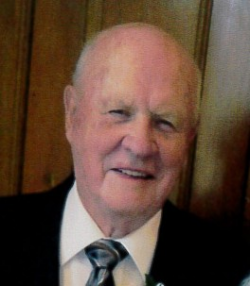 Blair Spicer Atkinson – 90, Truro. With his wife of 65 years by his side, Blair Spicer Atkinson went home to be with His Lord at 6:00am on April 19, 2022. Blair was born in West Apple River, Nova Scotia on Christmas Eve, 1931, the son of the late Garfield Roy Atkinson and Aileen Rebeca (Spicer) Atkinson.

Next to loving God, Blair loved his wife, Doreen and his family very much and will be greatly missed by them. Blair was very outgoing and that gained him many new friends over the years. After graduating from high school, Blair graduated from Saint Charles Business College in Amherst, Nova Scotia where he earned his degree in Business Administration. Afterwards he worked for the US Air Force (Goose Bay, Labrador), Halliday’s (Truro), Wilson’s Equipment (Truro) and had several positions with Air Canada (Halifax Stanfield International Airport) including loading and unloading the planes, Air Traffic Control and management until he retired in June 1988.

Blair had many passions in life that included sailing and refitting the 65-foot wooden schooner that he owned and other motor vessels that he owned, hunting, fishing, snowmobiling, travelling and in later years he and Doreen enjoyed spending time in their travel trailer at several beaches along the Glooscap Trail.