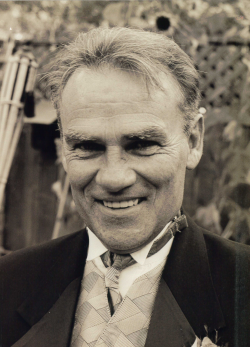 Gary William Ferguson - 76, of Truro, passed away on Wednesday, April 27, 2022 at Colchester East Hants Health Centre, after a courageous battle with cancer.

Gary was born in Truro, Nova Scotia to the late Betty and Don Ferguson. In 1968, he graduated from the Nova Scotia College of Art & Design with a diploma in Commercial Art. After working in Halifax and Toronto, he was transferred to Vancouver in 1969. During his 46 years in Vancouver, he worked in graphic design, set design, house design and construction. In 1984, he formed Eclipse Productions with Glenn Patterson. Just a few of his achievements included working on The Beachcombers, The Irish Rovers, The Paul Anka Show, and The Canadian Country Music Awards. His talent was recognized with an award for the Kokanee Beer commercial, "Caves and Glaciers."

Gary spent the greater part of his time on the west coast living on Bowen Island, the jewel of Howe Sound. In the early days, he involved himself in the community, building sets with the theater group. His friends jokingly referred to him as the "Mayor of Scarborough" because he built four homes on Creek Road. In his spare time, he enjoyed boating and exploring the coastline up to Desolation Sound with his wife, Martha. When he wasn’t cruising, he loved to hang out on the docks on the Tainui, with Scooter and Murphy. His passion was art and creativity in various mediums, and he was often found in his studio. Gary and Martha always knew how to throw a good party, and enjoyed their trips to Mexico. To their friends, they would like to extend their gratitude for their love and support - a special nod to his poker buddies.

After retiring in 2014, Gary returned to his hometown of Truro, where he renovated his family home and took much pleasure in visits from his grandsons, Anders and Kristian. Even after his cancer diagnosis in 2016, he managed to complete his renovation project and took every opportunity to explore the province, enjoying the beach in the summer, but cursing the Nova Scotian winters.

He will be greatly missed by his wife, Martha; sister, Heather; his children, Mark Ferguson, British Columbia and Jennifer (Yngve) Sangolt, Texas; his grandchildren, Tiana, Jesse, Anders and Kristian; and nieces, Stephanie Fielding and Kari Blaikie, and their families.

Arrangements are entrusted to Mattatall-Varner Funeral Home, 55 Young Street, Truro. At Gary’s request there will be no service. If you would like to honor Gary, donations to VON Canada or Terry Fox Foundation are welcomed. Private messages of condolence may be sent to the family by viewing Gary’s obituary on-line and selecting "Send A Condolence" at:www.mattatallvarnerfh.com