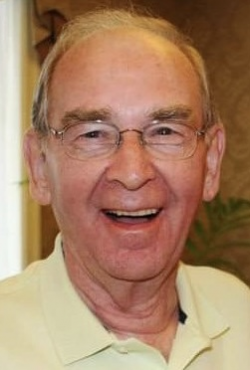 Vernon M. Geddes - 90, Truro, passed away peacefully on Saturday morning, May 28, 2022, at Colchester East Hants Health Centre, Truro. Born in Truro, and raised on the family dairy farm in Alton, he was a son of the late Ozro and Annie (McInnis) Geddes.

Vernon and his late wife, Shirley, attended First United Church and after Shirley’s passing, he began attending Trinity United Church with his special friend, Jennie Whalen. In earlier years, he worked in the Service Department at Cockshutt Farm Equipment and Nelson Motors. He then drove trucks for Barnhill Transport and White Rose Oil Company until 1963.

At the urging of his brother, Doug, he then joined London Life and worked as an insurance agent until his "retirement" in the 1980s. Although retired, he kept an office until about 10 years ago, and had offices on Dominion Street, Parker Street, BMO Building on Commercial Street, Queen Street above Church’s Barber Shop, Victoria Street and then at the corner of Duke and King Streets. He was a long-time member of Truro Kiwanis Club until the club closed. He also enjoyed supporting and watching local Pee Wee hockey.

Special thanks are extended to Dr. Aliya Kelly, Dr. Hali Bauld, Dr. David Henderson and the nursing staff of B3 for your wonderful care, compassion and concern.

Arrangements have been entrusted to Mattatall - Varner Funeral Home, 55 Young Street, Truro, where Vernon’s family will receive friends from 6-8 p.m., Tuesday, May 31, and funeral service 3 p.m., Wednesday, June 1, Reverend Glenn MacLean officiating. (Webcasting of the funeral service will be available at 2:55 p.m., Wednesday, June 1, 2022 and will remain on this site for some time.) Interment in Brookfield Westside Cemetery. If so desired, donations in Vernon’s memory to Heart and Stroke Foundation or Alzheimer Society of Nova Scotia are welcomed. Private messages of condolence may be sent to the family by viewing Vernon’s obituary on-line and selecting "Send A Condolence" at: www.mattatallvarnerfh.com