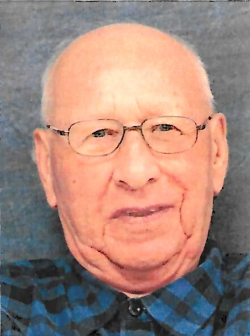 Joseph Gray "Joe" Lynds - 85, New Glasgow, formerly of McPhersons Mills. It is with sadness that the family of Joseph Gray Lynds announces his death on Friday, May 27, 2022, in the Aberdeen Hospital Palliative Care Unit. Born in Westchester Station, Cumberland County, he was the son of the late Thomas and Emma (Turner) Lynds. He was predeceased by his brothers, Garnet, Gerald "Gerry", Brent; son-in-law, Terry Rector.

In his early years, Joe worked at many different occupations, from sawmills, mining, furniture fabrication, and up until his retirement in the early 90s, with Department of Transportation. A long-time resident of McPhersons Mills, Pictou County, Joe spent many a day in his yard, digging rocks out of the brook, only to spend many more, putting them back in. He was a hard worker, never hiring anyone to do a job; he always took on the task to do it himself. He loved being outside, with the exception of his afternoon nap. He kept the roadsides well cleaned as he walked them every day.

Joe could be found trying to make deals at the Superstore where the girls were always good to him, slicing his bread, and helping him find the sales. Joe enjoyed hunting in his earlier years, but his heart was in Westchester Station with his brother, Brent on Higgins Mountain. There they would cut wood, tap the trees during maple syrup season and rake blueberries. Back at the house there would be a turkey, a roast and a huge pot of potatoes for supper, just like their Mom always made, and of course, way too many desserts.

Arrangements have been entrusted to Mattatall – Varner Funeral Home, 55 Young Street, Truro, where Joe’s family will receive friends from 6-8 p.m., Wednesday, June 1, 2022, and 1-1:45 p.m., Thursday, June 2, 2022, followed by the funeral service at 2 p.m., Thursday, June 2, 2022, The Reverend Janet Hatt officiating. Interment in Eagle Hill Cemetery, Westchester Station. If so desired, donations in Joe’s memory to Alzheimer Society of Nova Scotia are welcomed. Private messages of condolence may be sent to the family by viewing Joe’s obituary on-line and selecting "Send A Condolence" at: www.mattatallvarnerfh.com