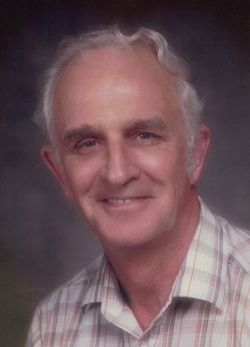 Thomas "Tom" Nutter - 94, Truro, had a quiet, peaceful, and comfortable passing in the early morning on Sunday, June 5, 2022, at home surrounded by family. Tom was quoted that the journey with his wife Brenda Nutter (Tait) was the best years of his life. Born in England in 1928, his family immigrated to Canada in the spring of 1930 and settled on a farm about eight miles from Salisbury, New Brunswick.

Tom worked at Lafarge for 40 years and retired in January 1992. Tom lived in many provinces, with Nova Scotia being his final home. He travelled all over the province fishing and took many memorable trips, with the Canada By Rail trip with Brenda, visiting family and friends, being his favourite.

During his retirement years, he shifted his focus to restoring antique furniture and became the local handyman that could fix anything you challenged him with. Tom was a gardener known for his glads which he generously shared with friends and neighbours. Tom was a kind and thoughtful man who was well known to always give more than he received and would help anyone.  He was a humble and humorous man that people loved to be around.

Tom was a Past Master and Past District Deputy Grand Master (1982) of Truro Masonic Lodge #43, where he wrote the first 100 years on the history of the Truro lodge and received the Meritorious Award. He held numerous positions in the organization throughout his life, always trying to help the community in any capacity he could.

A very special thanks to the dedicated care of the VON CCAs, RNs, Nurse Next Door and the wonderful palliative care team, Dr. Cortney Smith, and Cheryl Graham, who made him smile, feel special and joyful by making his life easier during a difficult time.

Respecting Tom’s Wishes, there will be no visitation. A private family gathering to celebrate his remarkable life will be held at a later date.  In lieu of flowers, donations in Tom’s memory to Colchester East Hants Hospice Society are welcomed.

Arrangements have been entrusted to Mattatall – Varner Funeral Home, 55 Young Street, Truro. Private messages of condolence may be sent to the family by viewing Tom’s obituary on-line and selecting "Send A Condolence" at: www.mattatallvarnerfh.com