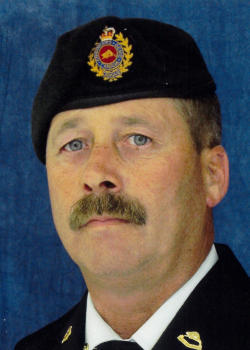 MWO (Retired) Max Marven Ransford Davis – 61, Truro. We are deeply saddened to announce the passing of MWO (Retired) Max Marven Ransford Davis, a 37 year veteran of the Canadian Armed Forces on Tuesday, June 7, 2022, following a battle with cancer. Born in Pembroke, Ontario, Max, or "Randy", as he was known to many in New Salem, Nova Scotia where he grew up, was a son of the late Max and Ruth (McNally) Davis.

Max was a proud Canadian, veteran, husband and father who packed a lot of life into his short 61 years. He always lived life in the moment and would do anything for those he loved.

He began his military career as an infantryman with the RCR, later remustering to Construction Engineer. He deployed numerous times throughout his career, including a peacekeeping mission to the Former Yugoslavia and two deployments in Afghanistan. He made history when he participated in the building of four bridges that became part of the Trans Canada trail in Nova Scotia. Max truly upheld the motto "Service before self" throughout his career.

Following his well-deserved retirement in 2015, Max and his wife, Wendy split their time between Truro and New Salem in the home where Max grew up. Max loved spending time with his family, ATVing, fishing, playing cards and games, listening to Stompin’ Tom Connors, building huge bonfires on the beach and setting off elaborate firework displays to entertain. He also spent time volunteering with Royal Canadian Legion, Branch 26, Truro.

Max is survived by his wife, Wendy (Urquhart); his children, Max (Christiane), Dorothy (Anton) and Darrell; step children, Heather, Holly, Andrea, Victoria and Elizabeth; grandchildren, Andrew, Elizabeth and Odin; siblings, Terry-Ann, Debra and Jeff. Along with his parents, he was predeceased by his brother-in-law and best friend, Charles Thompson.

Celebration of Life will be held from 2-5 p.m., Saturday, June 18, 2022, at Royal Canadian Legion, Brnach 26, Truro. As Max clearly stated, he does not want people to be sad, but rather have a party and raise a glass of whiskey in his name. Private family interment will be held in New Salem at a later date. In lieu of flowers, donations in Max’s memory to Wounded Warriors to support their service animal program are welcomed. Max loved animals and had an interest in training service animals to support veterans.

Arrangements have been entrusted to Mattatall – Varner Funeral Home, 55 Young Street, Truro. Private messages of condolence may be sent to the family by viewing Max’s obituary on-line and selecting "Send A Condolence" at: www.mattatallvarnerfh.com