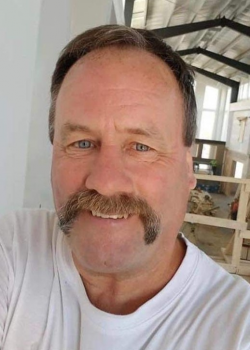 Mark Anthony McCabe - 65, North River, passed away suddenly on Sunday, July 31, 2022, as a result of a heart attack, while enjoying time on the deck at his cottage in Marshville, accompanied by his best friend, Shelley Cameron and friends.

Born in Truro, he was the loving son of the late Ernest and Marie (Gullens) McCabe. In earlier years, Mark worked construction in Edmonton, Alberta. While in Edmonton, he cycled through the Rocky Mountains and camped outside; this took him 38 days to complete, and he kept a journal of his adventures. Mark loved to relive memories of his varies antidotes and adventures with his family and friends. When he returned from Alberta, he worked for Gordon Matthews building houses and then became self employed as a house painter and residential property owner.

In Mark’s earlier days he played hockey/broomball and rugby. He enjoyed all seasons with his love of outdoor activities - hunting, fishing/boating, snowmobiling and roughing it at his solar camp.

Mark's greatest joy was being a father and supporting his three children in motor crossing and all of the great memories they made.

A celebration of Mark's life will be held later. If so desired, donations in Mark's memory to Colchester Food Bank are welcomed.

Arrangements have been entrusted to Mattatall - Varner Funeral Home, 55 Young Street, Truro. Private messages of condolence may be sent to the family by viewing Mark’s obituary on-line and selecting "Send A Condolence" at: www.mattatallvarnerfh.com