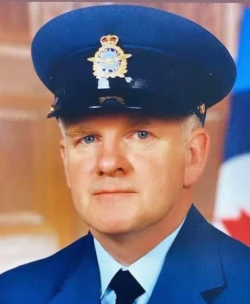 Ronald Henry Caudle, Sr. – 87, Truro, passed away peacefully on Sunday, August 28, 2022, at Colchester East Hants Health Centre, Truro, with his family by his side. Born in Truro, he was a son of the late George and Alice (McCallum) Caudle.

Ron began his 33-year career in the Canadian Navy in 1955, serving on several ships including HMCS Bonaventure, Athabaskan, Iroquois, and Ottawa. Most of his time was served at CFB Shearwater with postings to Prince Edward Island and Alberta thrown in. He rose to the rank of Chief Warrant Officer before retiring in 1988.

In his early years, Ron was an active participant in many sports including basketball, football, rugby, and broomball just to name a few. He later turned his interest to golf and spent many a day on the fairways and greens. Ron was a member of the Enfield, Elmsdale and District Lions Club as well as the Elmsdale Legion, where he was always ready to offer up his time for any event.

Arrangements have been entrusted to Mattatall - Varner Funeral Home, 55 Young Street, Truro, where Ron’s family will receive friends from 2-4, 6-8 p.m., Thursday, September 1, 2022, and funeral service 2 p.m., Friday, September 2, 2022. In lieu of flowers, donations in Ron’s memory to Heart and Stroke Foundation are welcomed. Private messages of condolence may be sent to the family by viewing Ron’s obituary on-line and selecting "Send A Condolence" at: www.mattatallvarnerfh.com