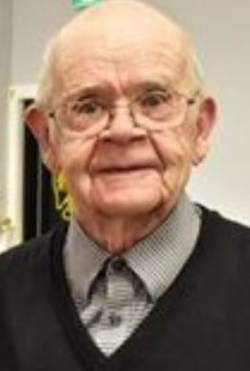 Crowe, Milford "Bruce" – It is with great sadness that we, the family of Milford Bruce Crowe of Truro, announce his peaceful passing on Sunday, September 4, 2022, in Colchester East Hants Health Centre at the age of 93. Born in South Athol, Cumberland County, he was the oldest son of the late Laurie Milford and Ursula (Smith) Crowe, (East Mapleton, Cumberland County).

Bruce worked as an auto mechanic for approximately 37 plus years, where he specialized in cars, trucks and heavy duty equipment. His places of employment were Goodspeed’s Ltd. (Truro), Scot Truck Plant (Debert), Moffatt Brothers Ltd. and Nova Enterprises, both in Truro. Bruce spent his free time helping family, friends and neighbours whenever the phone rang and doing projects around the house. He also made time for his family by going camping on weekends, snowmobiling, visiting relatives, and playing his fiddle. Once Bruce retired, he joined a musical group called the Musical Vets where they played at the Truro Legion. He also played with other groups at the Senior Care Homes, dances at the Onslow Junior High School, Douglas Street Community Center, Bible Hill Fire Hall, and at special events like birthdays, anniversaries and was also a member of the Y Seniors Group.

The family wishes to extend a special heartfelt thank you to the doctors and nurses at the Colchester East Hants Health Centre Palliative Care Ward and VON nurses for the excellent care.

Arrangements have been entrusted to Mattatall - Varner Funeral Home, 55 Young Street, Truro, where a funeral service will take place 2 pm Sunday, September 11, 2022, Reverend Shannon MacLean officiating. Interment to follow in Mapleton Cemetery.  In lieu of flowers, donations to Truro Boys and Girls Club, Heart and Stroke Foundation, Canadian Cancer Society, or a charity your choice are welcomed. Private messages of condolence may be sent to the family by viewing Bruce’s obituary on-line and selecting "Send A Condolence" at: www.mattatallvarnerfh.com