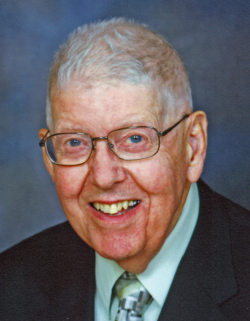 D. H. Crawford Purdy – 96, Bible Hill, passed away on Thursday, September 8, 2022 at Colchester East Hants Health Centre, Truro, due to complications following a massive heart attack. His passing will leave a terrible void in the lives of those who knew and loved him.

Crawford was born in Shoal Lake, Manitoba. At the age of 12, after the death of his father on the family farm, he moved with his mother and four sisters to Truro. He quickly became the man of the house, looking after his mother and older sisters. He took a position with, known at the time as Nova Scotia Agricultural College, as a welder and worked there for 35 plus years. It was there, at NSAC where he met, and then married, Frances Chisholm, on August 1, 1951.

He was a longstanding member of the former First Baptist Church, Truro, where he had been very active and served as a Deacon in the church. Crawford was a member of Bible Hill Fire Brigade for 50 years and he was an honorary member of Colchester Heritage Rug Hookers, as he serviced their wool cutting machines and handmade the hooks, used by them.

Crawford wore many hats in his lifetime and was a wealth of mechanical knowledge that will be missed. He was very good at making and fixing things with his hands. He built the family a travel trailer and took them on many vacations, during the 60s and 70s, including trips to Montreal, Toronto and down into the United States. He loved gardening and grew fruits and vegetables, raised bees and harvested the honey; all these things for the family to use and sold to local stores. He took pride in the vehicles he owned over the years, hand washing and waxing them weekly, back in the day when that was needed. He was "Mr. Fix It" for folks in the community who would bring items to him, hoping he could fix it for them; no job was too big or too small for him, and he enjoyed folks stopping in to visit and loved to be kept up to date with the neighbourhood happenings.

In accordance with Crawford’s wishes, there will be no visitation or funeral service, however, a graveside interment service will be held 2 p.m., Tuesday, September 20, 2022, at Crossroads Cemetery, 110 Salmon River Road, Valley.  Memorial gifts, if desired, may be made to a charity of choice.

Arrangements have been entrusted to Mattatall - Varner Funeral Home, 55 Young Street, Truro. Private messages of condolence may be sent to the family by viewing Crawford’s obituary on-line and selecting "Send A Condolence" at: www.mattatallvarnerfh.com