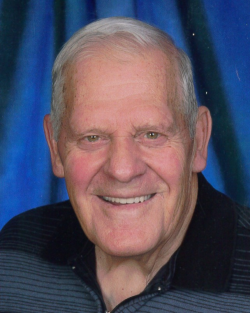 He graduated from Maritime Forest Ranger School in Fredericton, New Brunswick, and went to work with NS Lands and Forests on Chignecto Game Sanctuary in the late 1950s. In 1956 he married his sweetheart, June MacLaughlin. Dad and Mom later moved the family to Antigonish where he had a long career with Stora Forest Industries. While in Antigonish, Dad was active in his church and volunteered with RCMP Auxiliary.

Upon retirement, Dad and Mom moved back into his childhood home in Little Bass River. Again, he became actively involved in the church and the community, especially in helping establish the West Colchester Medical Centre. Dad was a family man and was very proud of his children, grandchildren and great grandchildren. He delighted in learning how to play games with Ezinne and teaching Hunter to whistle. He became caregiver to Mom for many years until her death in 2013. He loved vegetable gardening, walking for exercise, birds and all things nature. He also loved to tell stories, especially of his adventures catching deer jackers.

Along with his parents, he was predeceased by his wife, June; daughter, heather; sister, Dorothy (Williams); brothers, Douglas, Donald, Darrell; nephews, Bradley and Darwin. We would like to thank the VON Home Care Workers, whose caring support enabled Dad to stay in his own home. We would also like to thank Leona Allen, whose guidance and compassion were invaluable to us. Thank you also to Myrna Fisher for her friendship and support over all these years and Dianne Wenham, neighbour extraordinaire.

Arrangements have been entrusted to Mattatall – Varner Funeral Home, 55 Young Street, Truro. Private messages of condolence may be sent to the family by viewing Dale’s obituary on-line and selecting "Send A Condolence" at: www.mattatallvarnerfh.com