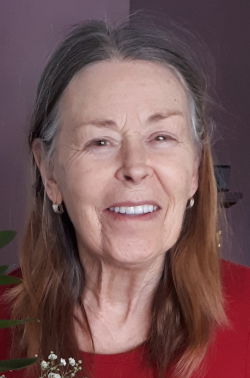 Susan Elizabeth (Gyles) Crowell - 73, East Mountain. After a long and courageous battle with dementia, Susan has been freed to join her parents, Ed and Beryl (Thomas) Gyles.

Susan was born in Windsor, Ontario where she attended elementary school, and later moved to Ajax with her family where she was the 1967 Prom Queen and a 1968 graduate of Ajax High School. At the age of 14 Susan began taking figure skating lessons out of the Tam O'Shanter Club in Scarborough. She quickly advanced through her test levels and at age 18 headed east to Nova Scotia where she would become one of the province's top coaches for over 30 years. After stops in New Glasgow and Halifax, Susan arrived in Truro to coach with Truro Figure Skating Club. She became well-known not only at Colchester Legion Stadium, but in rinks around the province like those in Brookfield, Tatamagouche and East Hants where she spent many long hours coaching young skaters. Susan was recognized by the Canadian Figure Skating Association in 1998 as national Coach of the Year. She retired from professional coaching in 1999. Susan also served as the chairperson for the Nova Scotia Section of the CFSA, and volunteered during the 1990 World Figure Skating Championships and 1998 Skate Canada in Halifax.

In addition to her coaching career, Susan also worked at Martha Murray's fabric store in the 70s and later opened her own businesses, Truro Fabric Studio and Creative Sewing Machine. Susan was a talented seamstress and made all types of clothes, Halloween costumes and decorations over the years. She was known to have a green thumb and could be found in her gardens on East Mountain whenever the weather allowed. Susan was also a self-taught interior painter and enjoyed renovating and redecorating, never afraid to experiment with a new technique or colour.

Despite her unfortunate circumstances over the last few years, Susan was always happy to have company. In addition to Richie spending time with her daily, recent visits from her sons, her siblings, skating pupils Stephanie, Julie and Kandace, and long-time friend, Francine brought a smile to her face.

Susan's family would like to thank the staff at Cedarstone Enhanced Care for their compassion throughout her stay, and the dedicated nurses of VON who provided home care prior. Also, a heartfelt thanks to sister-in-law, Sonja and friend, Cathy who helped Richie care for Susan at home as long as possible.

A private family ceremony will be held at a later date. In lieu of flowers, the family requests donations be made in Susan's memory to Alzheimer Society of Nova Scotia or VON (Colchester East Hants).

Arrangements have been entrusted to Mattatall – Varner Funeral Home, 55 Young Street, Truro. Private messages of condolence may be sent to the family by viewing Susan’s obituary on-line and selecting "Send A Condolence" at: www.mattatallvarnerfh.com