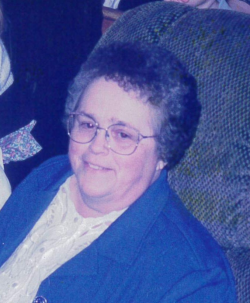 The family of Nancy Carol Hebb, age 80 of Central North River, wish to announce her passing on Sunday, October 23, 2022 surrounded by her family at her home. Nancy was the third oldest daughter of the late Claude and Blanch (Baker) Slack. She was born in Folly Mountain where her mother gave birth to her on her own.

After high school, Nancy continued her education at Success Business College (Truro). Prior to graduating, she was offered a position at London Assurance for A.G. MacPhail which she started right away.

All her life, Nancy was devoted to church and Sunday school. At age 4, she started Sunday school, then onto Explorers and finally C.G.I.T at the age of 12. Once she finished C.G.I.T., she became a Sunday school teacher at Debert United Church. Once married, she taught at the Onslow United Church. When her children were old enough she began teaching at the North River United Church from 1973-1982. From 1982-2002 she was the superintendent of the North River United Church Sunday School. During this time she grew the attendance from 12-15 children to 125 children.  The annual Christmas concerts were looked forward to by the young and old. As a member of the North River Church choir, she performed at various venues throughout Colchester and Pictou County. In 2002 due to health issues Nancy had to retire from both her passions.

Nancy looked after her oldest sister, Rosalie for over 18 years after their mother passed away. Then when both Nancy and Rosalie’s health deteriorated, Nancy made one of her hardest decisions in life. Rosalie went to live at Wynn Park Villa until December 2014.

A heartfelt thank you is sent to everyone who helped take care of Nancy, especially the VON nurses, home care workers and the VON Palliative Care Team. In particular, Cheryl Graham for her help and dedication, not just for Nancy but for Nancy’s family also.

Arrangements have been entrusted to Mattatall – Varner Funeral Home, 55 Young Street, Truro, where the funeral service will be held 1 p.m., Sunday, November 6, 2022, Reverend John Parsons officiating. Interment to follow in Middle Road Cemetery, Debert. In lieu of flowers, donations in Nancy’s memory to Canadian Cancer Society or Victorian Order of Nurses are welcomed. Private messages of condolence may be sent to the family by viewing Nancy’s obituary online and selecting "Send A Condolence" at: www.mattatallvarnerfh.com