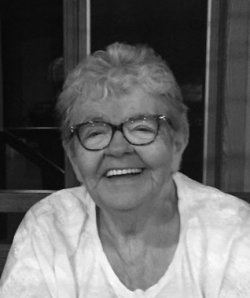 The glue that held her family together, Judith Elizabeth Duthie Smith took her last breath on Saturday, October 29, 2022 with her loving husband, Brian by her side at Colchester East Hants Health Centre, Truro. Born in Montreal, Quebec and raised in New Richmond, Quebec, Judy was a daughter of the late Roland and Isabelle (Grenon) Duthie.

From early on, Judy and her little sister Caroline were surrounded by an extended family of aunts, uncles, and cousins that were richly loving and supportive. This formed who Judy became in life.

Judy had an indelible strength with an underlying fragility. She cared deeply about the welfare of others and if you had the good fortune to share time and space with her, you benefited from it and you were, to her, the most important person in the room. She loved to laugh and if you were the type of person who could bring out the playful mischievous side of her, she was particularly fond of you. That would lead way to what she called "hellery".

As a single mother by the time she was 28, she knew how to, and did everything herself, and if she did not know she would figure it out. She was practical and resourceful and she could build anything with two knitting needles and a ball of yarn. In her later years, Judy went back to school and studied Early Childhood Education. Raising five children of her own prepared her for a career with other little ones.

If you asked her, she would say her greatest achievement was her kids, grandkids and extended family. She was always there for them, fiercely protective of them, and never leaving anyone behind. While her life never presented as easy, it was rich and full with the things that mattered most and she knew it. She was surrounded by people who truly loved her, and while she seemed naive to the fact that she deserved to receive back what she gave, she was acutely aware of that love.

Arrangements have been entrusted to Mattatall – Varner Funeral Home, 55 Young Street, Truro, where a funeral service will be held 1 p.m., Monday, November 7, 2022, Reverend Valerie Kingsbury officiating. If so desired, donations in Judy’s memory to a charity of choice are welcomed. Private messages of condolence may be sent to the family by viewing Judy’s obituary online and selecting "Send A Condolence" at: www.mattatallvarnerfh.com