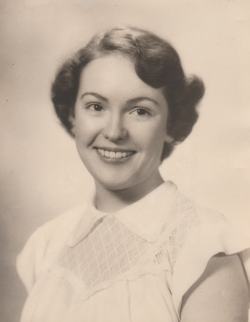 Dorothy Catherine (Nicholson) Jack -  91, of Brookfield,  passed away on Sunday, October 30, 2022 at the Lillian Fraser Memorial Hospital, Tatamagouche.  Born in Sydney, she was a daughter of  the late Mamie (MacRae) and Roderick  Nicholson. She was predeceased by her sister, Christine Buist, and her niece, Shirley (Buist) Jackson.

Dorothy loved books. Her employment with Colchester East Hants Regional Library gave her the opportunity to be immersed in an environment of learning, where she could explore a diverse and perhaps eclectic choice of books (Einstein, physics, black holes, philosophy, literature, history, …). She was able to share her love of reading with others, whether that be through trips on the Bookmobile, reading to children at the library, or years of book discussion groups. Her collection of books meant a great deal to her, so if you wanted to stay in her good graces, you returned any borrowed items. If the book had been deemed "thrash" she made it clear she didn’t want to see it again.

While she was physically able, she spent a great deal of time and effort on the creation of a beautiful garden around her property in Forest Glen. The clay soil tried its best to foil her efforts, but her determination to be surrounded by flowering plants won out. The passage of time has erased much of the cultured beauty but the remnants of what was can still be seen if you look closely.

Dorothy’s legacy lies in her family; five daughters, one son, twelve grandchildren, and five great-grandchildren. They will all mark her passing in their own way and they each meant a great deal to her. Daughters, Heather Jack (Bryan), Kathleen Trainor (Martin), Maureen Jack (Francis), Linda Jack (Jim), Elaine Jack (Daniel) and her son, Roderick Jack (Kristina) would like to acknowledge the friendship and compassion shown by her Forest Glen neighbours in the last days of her life. It meant a great deal to her and to us for her to remain at home so long.

Dorothy is survived by her former husband, William Hugh Jack.

Pursuant to her wishes, Dorothy has been cremated. A private family gathering will occur at a later date. For those who knew Dorothy, we ask that you celebrate her life and perhaps have a glass of red wine in her honour. Arrangements have been entrusted to Mattatall~Varner Funeral Home, 55 Young Street, Truro. Private messages of condolence may be sent to the family by viewing Dorothy’s obituary online and selecting "Send A Condolence" at: www.mattatallvarnerfh.com

They are not long, the weeping and the laughter.

Love and desire and hate:

I think they have no portion in us after

We pass the gate.

They are not long, the days of wine and roses:

Out of a misty dream

Our path emerges for a while, then closes