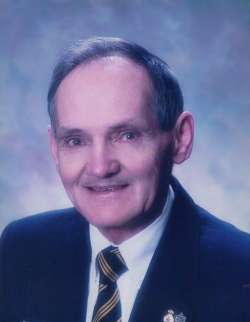 The family of Ronald (‘Ron’, ‘Ronnie’) Francis MacKenzie, of Truro, are saddened to announce his passing on Sunday, October 30, at the age of 91. He passed away peacefully at the Colchester East Hants Health Centre. Born in Truro, he was the son of the late Joseph and Florence (Doucette) McKenzie.

He and his five brothers and four sisters grew up in the east part of the town, on Park Road by Victoria Park and later Miller Road. His affection for the area remained throughout his lifetime as he easily and fondly recalled the many opportunities he had to explore the park and play little league baseball at nearby Victoria Park diamond.

While still a teenager, he joined the Royal Canadian Navy in 1948 where his four-year tenure led to a long career in meteorology, primarily with Environment Canada working out of Halifax Stanfield International Airport. Even after retiring from his meteorology technician position at the Enfield-based airport, he answered calls to return to the profession and worked out of weather stations across Atlantic Canada, including Charlottetown, St. John’s and Trenton, Pictou County. All totalled, he spent 35 years in meteorology.

While baseball was an early passion, so too was hockey, and both remained so throughout his life. His youth baseball involvement included playing second base for the East End Naturals – Truro juvenile baseball champions in 1947 and ’48, before joining the navy. He first played organized hockey as a bantam at the old Truro Forum. He played both sports long into his latter years with slo-pitch softball replacing baseball.

His hockey involvement included time in the old Truro District League and he was an original member of the Truro Bearcat Oldtimers who formed in 1978 to face-off against a touring Swedish team. The team continued on for many years and Ron loved his time with Bearcat Oldtimers which included participation in tournaments in Florida and a trip to California. And while his involvement with the Oldtimers is significant, he may best be remembered for continuing a celebrated Wednesday afternoon hockey hour at the Colchester Legion Stadium as the player-organizer into his early 80s. And when it was time to hang up the blades for the spring/summer, out came the golf clubs and he became well-known in his last few years of golfing for beating everyone to the Truro Golf Club for an early round, usually on his own with just the dew on the ground to greet him each morning.

‘Speed or ‘Old Speed’ as he was affectionately known, was named Truro Sport Heritage Society’s Male Senior Athlete of the Year in 2008, for his many endeavours. A strong card and pool player, he was also an avid hunter and fisherman and a man who could tackle any ‘do-it-yourself’ project long before the term ever came into existence. He loved to garden and get his hands dirty, no matter the project.

Harkening back to his time with the navy, he was well known for his involvement in the former Main Brace Naval Veterans’ Club in Truro and later, with the Royal Canadian Legion Branch 26, which included a term as club president. He would be especially busy this time of year making sure Remembrance Day was first and foremost on people’s minds and folks were supporting veterans through the poppy campaign and other events. From poppies, his attention would quickly turn to Christmas Kettles for the Salvation Army and the upcoming holiday season. The season was a special one for Ron who took great pride in home decorating, as well as trimming the family Christmas tree. A tradition was waiting for the final reveal of the fully decorated tree on Christmas morning.

Another wintertime tradition at the MacKenzie household on Dominion Street was the backyard rinks Ron would painstakingly build and maintain each season. He often finished off a long evening shift at the airport and drive back to Truro, by flooding the rink in freezing temperatures, before finally going to bed. His efforts ensuring a fresh sheet the family could enjoy the following day and the glistening rink being the envy of the neighbourhood.

Arrangements have been entrusted to Mattatall – Varner Funeral Home, 55 Young Street, Truro where visitation will take place 6-8 p.m., Monday, December 5, 2022.  Funeral Mass will be held at 2:30 pm Tuesday, December 6, 2022 at Immaculate Conception Roman Catholic Church, 669 Prince Street, Truro, Father Andrew Rembarczyk officiating. Reception to follow in Campbell Hall at the church. Interment will be held at a later date. If so desired, donations in Ronald's memory to a charity of choice are welcomed. Private messages of condolence may be sent to the family by viewing Ronald’s obituary online and selecting "Send A Condolence" at: www.mattatallvarnerfh.com