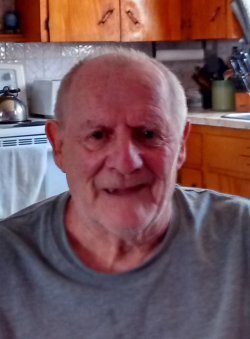 Tracey Raymond Rines Sr.  – 81, of Belmont, passed away on Tuesday, November 15, 2022 at the Colchester East Hants Health Centre. Born in Dartmouth, he was a son of the late Charles Ross and Evelyna Rose (Hayden) Rines.

He was predeceased by his wife, Valena Lynn Rines; several sisters and brothers.

The family wishes to extend special thanks to the VON, doctors and nurses of Colchester East Hants Health Centre and the Palliative Care team, especially to Angela McDonnell and Dr. Smith for the wonderful care given to Dad.

At Tracey’s request there will be no funeral service. Private family burial will take place at a later date in Belmont Cemetery. If so desired, donations in his memory to  Lung Association of Nova Scotia or Canadian Cancer Society are welcomed. Arrangements have been entrusted to Mattatall – Varner Funeral Home, 55 Young Street, Truro. Private messages of condolence may be sent to the family by viewing Tracey’s obituary online and selecting "Send A Condolence" at: www.mattatallvarnerfh.com