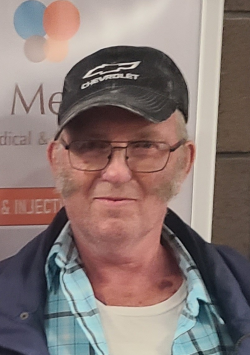 Donald Rodney Lake – 69, of Truro passed away on November 15, 2022 at the Colchester East Hants Health Centre. Born in Truro, he was a son of Edward and Evelyn (Brunt) Lake.

He was predeceased by his brother, Gerry and girlfriend, Anne Traverse. After Anne’s passing, her children, Sarah, Kathleen and Robert Traverse still remained an important part of his life.

In his earlier years, Donnie worked in the woods.  He dedicated much time to the care of his mother in her later years followed by the care of Anne until her passing. Living a simple life, he enjoyed spending time with his grandchildren.

At Donnie’s request there will be no service.  A private burial will be held at a later date in Bible Hill Cemetery. Is so desired, donations to Diabetes Canada are welcomed. Arrangements have been entrusted to Mattatall – Varner Funeral Home, 55 Young Street, Truro. Private messages of condolence may be sent to the family by viewing Donnie’s obituary online and selecting "Send A Condolence" at: www.mattatallvarnerfh.com