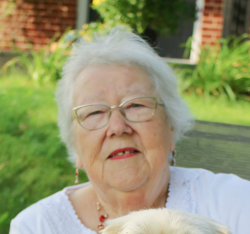 It is with great sadness that we announce the peaceful passing of Sabra Ruth (Huntley) Maynard, 84, of North River on Wednesday, November 30, 2022 after a courageous battle with her illness. She was surrounded by her family in the Palliative Care Unit of the Colchester East Hants Health Centre. Born in Wolfville, she was a daughter of the late Stanley and Nina (Tupper) Huntley.

Sabra grew up in Scots Bay where she enjoyed going to church and singing songs within the community. She graduated from the old Canning High School and then went to Mack Business College where she was recruited to become a secretary at the NSAC in Truro. She later went on to work for the now CCRCE. Sabra was a secretary at North River Elementary School for many years and then went on to work at various offices within the school board from where she retired at the age of 62.

Sabra was a member of TOPS NS 2709 for over 30 years. She always looked forward to her Wednesday night meetings where she met countless friends over the years. Her faith in God gave her strength during her most trying times. She was an adherent at the Salvation Army, where she made many close friends. Sabra volunteered in lots of their programs, including the Christmas Kettle Program. Sometimes she played the piano at the services, even though she couldn’t read the sheet music.

Sabra had a love for music from a very young age; besides the piano she also played the organ and the accordion among other instruments. She also enjoyed sewing and knitting, providing hats and mitts for many to keep warm in the winter. She was an avid gardener, making jams and pickled vegetables. Sabra was happiest in the kitchen where she could cook and bake. Her bread, fudge, and baked beans were enjoyed by many.

Sabra cherished being a mother and grandmother above all. When her three boys were younger, she helped and encouraged her sons in all of their activities. She was involved with North River 4H, Recreation Association, and Mother’s Club. She was once nominated as Volunteer of the Year for Colchester County. In her later years, she was a proud grandmother, watching and supporting her grandkids and their various activities. Sabra’s door was always open for one and all. From the time the boys were young until they were grown young men, her home was a gathering place for the boys and all their friends. Although things could get lively, she enjoyed having a full house. She made sure everyone was fed, had a place to sleep, and gave motherly advice when needed. She was a second mother to many.

Sabra is survived by her three boys, Greg (Christina Edwards) of Valley, David (Lynn) of North River and Peter (Trish) of Truro. She was known as "Ninnie" to her grandchildren, Emily (Justin Miller), Jacob, Ashley, William, and Adam. She is also survived by her sister, Esther (John) Dowell of Langley, BC; niece, Kim (Mark) Strickland of Glenmont; nephews, Douglas (Heidi) Dowell and Mark Dowell (Meghan Cairns) of South Surrey, BC.

The family would like to thank the countless doctors, nurses, and staff that provided comfort and care to Sabra during her illness.

As per Sabra’s request, there is no visitation or service. A private family interment will be held in Scots Bay Cemetery. The family requests that any donations in memory of Sabra, be made to the Salvation Army Christmas Kettles, as it was held dear to her heart. Arrangements have been entrusted to Mattatall-Varner Funeral Home, 55 Young Street, Truro. Private messages of condolence may be sent to the family by viewing Sabra’s obituary on-line and selecting "Send A Condolence" at: www.mattatallvarnerfh.com