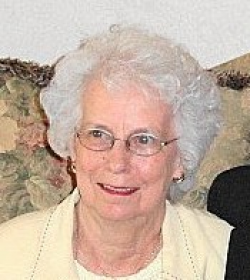 Lucia Irene "Lu" Fulmore – 90, Economy. With saddened, yet grateful hearts, we announce the passing of Lucia Irene (Durning) Fulmore, who passed away on Saturday morning, December 3, 2022, with the love of her life for over 70 years and her family by her side. Born in Lower Five Islands, Lucia was a daughter of the late Douglas and Gladys (Taylor) Durning.

Lu attended high school in Bass River where she met her future husband, and then went on to graduate from Nova Scotia Normal College in 1951, teaching in several schools in her career, some of which were one-room. She married her true love, Burchell on May 21, 1955, in Five Islands. After Burchell graduated from Nova Scotia Technical College in 1957, work took them to Hillsborough, New Brunswick, followed by a move back to Halifax in 1960 where they resided until 1986, at which time they returned home to Economy.

Lucia was very active in UCW, both at Edgewood United in Halifax and Economy United. She was a member of Ladies Auxiliary of Economy Fire Brigade and Economy Clam Festival. Lu was always willing to help out in her community when called upon. She treasured all the friendships that were made throughout her lifetime, especially in Clayton Park and Economy. The antique car community in which she and Burchell were very active throughout North America was another source of great friendships.

The family would like to express an extra special thank you to Dr. Harsh Mishra for his many years of compassionate care, and to all the V.O.N. workers who provided more than just their assigned responsibilities. Their excellent care and compassion shown to mom and dad over the last several years was second to none. We are forever grateful.

Family flowers only, please. If so desired, donations in Lu’s memory VON Colchester East Hants, Economy Recreation Centre or a charity of your choice are welcomed. Private messages of condolence may be sent to the family by viewing Lucia’s obituary on-line and selecting "Send A Condolence" at: www.mattatallvarnerfh.com