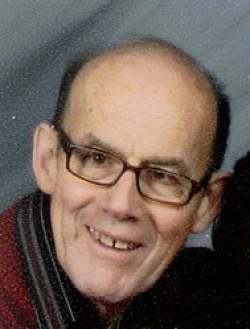 Born to Vincent Armstrong and Margaret (McNeil) and baptized at St. Michael’s Anglican Church in Windsor Forks, Jim grew up in an extended family of grandparents, aunts and uncles. Working alongside his treasured parents and siblings, he got an early schooling in the value of hard work in the family General Store.

Jim attended Nova Scotia Land Survey Institute in Lawrencetown where he studied cartographic drafting. He later studied surveying and mapping at Holland College in Charlottetown, Prince Edward Island where he met his lovely wife. He enjoyed an interesting career as a parks planner with Nova Scotia Department of Natural Resources. Using carefully shot photos from land, lake or helicopter, after collaborating with colleagues, he planned gorgeous lookouts, trails and campgrounds that continue to serve as the backdrop for outdoor memories for many generations. A consummate "interviewer", one of his favourite parts of the job was meeting farmers, land owners, historians, and community development activists to find out about their connection to the land.

After his retirement, Jim returned to his childhood beginnings in retail to be a merchandiser and "jack of all trades" at MacQuarrie’s Pharmasave in Truro. He was known for his kind heart, quick thinking, and dedication and loyalty to customers, co-workers and the entire MacQuarrie family.  In addition to his hard work, he was recognized for his sense of humour, as well as his happy whistling of songs, which spread smiles to those around him.

Jim was quite curious about people and the world and loved trying new things. His mother taught him to play "The Bear Went Over the Mountain" on harmonica at a young age. Even without any formal musical training, as an adult he learned to play the accordion and fiddle. Later in life he jammed in a band called "The Prince Street Boys" which played concerts for the public. His family always enjoyed listening to his musical stylings, from a wide repertoire which included folk music, old country songs and 1950s jingles. If the radio was on, he just might spontaneously pivot that right foot of his into a joyous and earnest "Dad Dance", to the delight of his daughters.

Jim also had many other talents such as landscape painting, writing, carpentry, cooking, baking, and gardening, all at which he excelled. He called himself a "walkaholic," as he enjoyed being in nature for his health and wellbeing. He loved to tell funny stories from his childhood, and we are grateful that before his illness advanced, he was able to finalize his memoirs entitled "My Memories of Windsor Forks." We wish to pay tribute to a loyal son, nephew, husband, father, grandfather, brother, uncle, and friend to anyone he met. His spirit "remains unvanquished," in accordance with the Armstrong Clan motto.

We would like to give special thanks to the nurses, support staff and Dr. Makkar at Vimy Court Long Term Care Facility, and to the medical professionals in Palliative Care Unit at Colchester East Hants Centre for their attentive care to Jim, as well as their guidance to our family on end of life care.