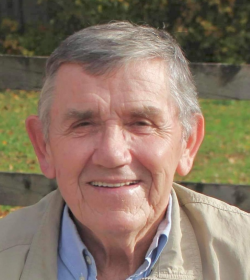 James (Jim) Thomson spent his life sharing great stories, quoting interesting things he heard on CBC, or finding humour in every situation. If he were writing this, it would probably be a witty poem that weaves logic, wisdom, and humour throughout. After all, this is his final great story.

Jim passed away peacefully on January 6, 2023 from complications related to lung cancer, surrounded by his loved ones, just six months after his 80th birthday.

Jim grew up on his family’s farm in Greenfield, raised by Bert and Ruth (nee Johnson) Thomson. His childhood was full of adventures and mischief with his siblings Marion, Bob, Mac, and Kenny. A brilliant man and avid learner, his quest for knowledge sent him on a journey that started with Mount Allison and the Nova Scotia Technical College, and wrapped up at McGill University. This adventure from Nova Scotia to Quebec also led him to the love of his life, Mary Facer. He knew immediately he would spend his life with her, and he did. Theirs was a great love story. They married, and together they raised three children, Karen, Heather, and Chris. He always said that his kids were his greatest accomplishment and proudest creation.

As a geological engineer, Jim spent most of his life exploring rocks. Professionally, Jim started his career in mineral exploration in Sudbury. After he completed his Masters, he continued his work in this field in Australia. But he longed to be closer to home, so his young family jumped on a boat and returned to Canada. For a while they lived in South Bay, Ontario where Jim continued to work in geology. Everywhere he went he accumulated stories and found amazing friends. Some of the latter even joined him when he returned to Nova Scotia.

Family always came first for Jim, and so he moved back to Nova Scotia to support his mother on the family farm and spend more time with his young children and loving wife. Although he spent the rest of his life farming, the rock walls around the Greenfield farm and his knack for decorating with rocks kept him connected to geology.

Jim dabbled in municipal politics for a while, but he spent most of his life surrounded by chickens, cows, weird barn cats, comical sheep dogs, and his beloved sheep. Always too soft-hearted to be a farmer, on any given day he could be found chatting to the animals as he made his way through his daily chores, probably sharing the latest interesting CBC fact or a rough draft of a poem with his attentive audience.

Jim never stopped learning and passing on his knowledge. He could fix anything or make something to do a job better. He was a dedicated member and leader of Greenfield United Church. When farming began to slow down, Jim took watercolour classes and became a talented painter. He was always active in his community and kept busy all of his life. Jim enjoyed writing stories and poems for any occasion, building amazing things, brewing beer, making wine and cider, and growing the most incredible veggies. Jim could do anything he set his mind to, as long as he wasn’t distracted by a good book.

Donations, in lieu of flowers, to Doctors Without Borders, Valley - Greenfield United Church, or a charity of your choice are welcomed.