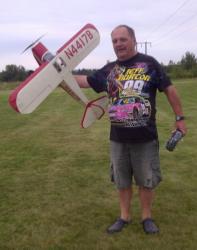 Hamilton, William Edward "Willie", 58, Upper Onslow, passed away peacefully surrounded by his family and friends on Friday, January 18, 2013 in the Colchester East Hants Health Centre, Truro. Born in Truro, he was a son of the late Edward and Marion (Winters) Hamilton. Willie was a taxi driver having worked for several years with Layton’s Taxi in Truro. He was an avid amateur radio operator having held the callsign of VE1WEH, a member of the Truro Lions Club, Truro, and a member of the Miniature Aircraft Society of Truro, where he received his wings.

Besides his parents, he was predeceased by, a granddaughter in infancy; uncle Foster McCarthy.