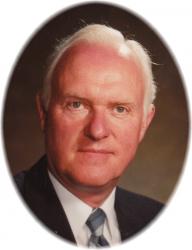 Charles Malcolm MacQuarrie, after living with grace for several years with dementia, Malcolm died on Thursday, May 15, 2014. Born in Truro, March 27, 1928, he was the son of Charles Allan and Maria (Grant) MacQuarrie.

After graduation in pharmacy from Dalhousie University in 1951, he began a 50 year career operating the family drugstore started by his father in 1920.  He was instrumental in the growth from a single store to a multi-store group across Nova Scotia. In 1987, he was one of the founders of Pharmasave in Atlantic Canada. He was past president of Nova Scotia Pharmacy Association and a member of Nova Scotia Health Services Commission for seven years; recipient of Truro & Colchester Chamber of Commerce Business Person of the year award in 1994; Rotary Paul Harris Fellowship in 1995; Bowl of Hygeia for service to the community through the profession of pharmacy in 1996 and Distinguished Service Award from Pharmacy Association of Nova Scotia in 1997. Malcolm was an active participant in First United Church as an elder, board of stewards, and member of the choir; Downtown Truro Partnership; Truro Concert Band for over 50 years and a strong supporter of Colchester East Hants Health Centre Foundation, the arts, and many other community organizations. Encouraging employees to reach their full potential, mentoring the young, friendships, family and contributions to the community will be Malcolm’s legacy.

Funeral service will be held 2 p.m., Wednesday, May 21, 2014, in First United Church, 711 Prince Street, Truro, Reverend Valerie Kingsbury officiating. Prelude music will be provided by Barrington Quintet from 1:15 p.m., until the start of the funeral service. Reception will follow in Memorial Hall. Interment in Robie Street Cemetery at a later date. Donations welcomed by First United Church Restoration Fund, The Cobequid Arts Council (Marigold Centre), Dalhousie College of Pharmacy, Dalhousie Medical Research Foundation, Landmark East School or a charity of your choice. Arrangements have been entrusted to Mattatall - Varner Funeral Home, 55 Young Street, Truro. Private messages of condolence may be sent to the family by viewing Malcolm’s obituary and selecting "Send A Condolence" at: www.mattatallvarnerfh.com