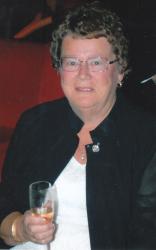 Ashe, Janet Elizabeth, 70, of Truro, passed away peacefully on Thursday, August 21, 2014, in the Cape Breton Regional Hospital Sydney, after a brief illness. Born in Halifax, she was a daughter of the late Daniel John and Marion Edith (Judge) Ashe. Janet was a Payroll Supervisor for the Halifax Regional School Board for 25 plus years. She was a major cruise ship enthusiast being around the world twice. An avid bowler, reader and enjoyed doing crafts. She is survived by brother, Daniel Ashe (Catherine), Windsor, ON; sisters, Deborah Ashe, Truro, Catherine Susan Ashe, Halifax, Juanita (Stan) Corbett, Bass River; nieces, Jessica and Danielle; grandniece, Madi; aunt, Mary Ashe, Halifax. She was predeceased by brother, Dennis; common law husband, Claire Graham. Cremation has taken place and no visitation as per Janet’s request. A graveside service and interment will be held 11am Saturday, September 6, at the Main Road Cemetery in Debert, Pastor Bill Martin officiating. Reception to follow in the Debert Legion Hall. No flowers by request. Donations in Janet’s memory may be made to a charity of your choice. Private messages of condolence may be sent to the family by viewing Janet’s obituary on-line and selecting "Send A Condolence" at: www.mattatallvarnerfh.com