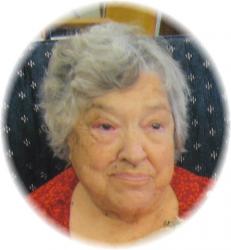 Dorothy Grace "Dot" Nielsen – 90, Shortts Lake. It is with heavy hearts that we announce the passing of our dear mother, Dorothy, at home on Sunday morning, September 7, 2014, surrounded by her loving family. Born April 21, 1924, in River Hebert, she was a daughter of the late James and Elsie (Hudson) Morrell.

Dot was a veteran of the Second World War and was a long-time member of Diamond Rebekah McCleave Lodge # 75, Stewiacke. She was a 4-H leader for over 35 years with the Brookfield Club and was nominated and inducted into the 4-H 500 Club of Canada. She enjoyed playing cards, growing flowers, doing jigsaw and word puzzles and spending time with her grandchildren and great grandchildren.

Arrangements have been entrusted to Mattatall – Varner Funeral Home, 55 Young Street, Truro, where Dot’s family will receive friends from 6-8 p.m., Tuesday, September 9, 2014, and where the funeral service will be held 2 p.m., Wednesday, September 10, 2014, Reverend Keith Gale officiating. Interment in Brookfield Westside Cemetery. In lieu of flowers, donations to Canadian Diabetes Association or Heart and Stroke Foundation of Nova Scotia are welcomed. Private messages of condolence may be sent to the family by viewing Dot’s obituary on-line and selecting "Send A Condolence" at: www.mattatallvarnerfh.com